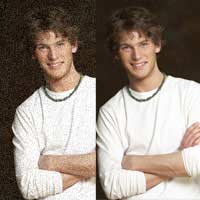 The benefits of digital photography are manifold but it also presents some significant drawbacks. One of the most major of these is the issue of digital ‘noise’. If you have experimented in any depth with digital photography you will almost certainly have experienced this phenomenon; pixel specks around your image which have the same appearance as a print from an analogue camera which has either been ‘pushed’ in development, or has used a high ISO film.

Digital noise is created in a different way, and in order to explain why it occurs it is necessary to have some knowledge of the mechanics of a digital camera (you may find it useful to read the other related articles on this site first). Essentially, when the shutter is opened on a digital camera the light hits a CCD or CMOS sensor that is made up of a vast number of photo-sensitive elements.

The sensor itself is not a digital component; instead, when light photons land on any of the ‘photosites’ of which the sensor is made up, it produces electrons. These are then passed as charges to an analogue to digital converter, ready for processing. Within this process there are a number of times at which noise can be produced. It can occur as a result of heat electrons being produced by the sensor and becoming mixed with the ‘genuine’ electrons. The most common cause, however, is the use of a high ISO or a long shutter speed; both of these actions increase the amplification of an already low-level electrical signal, which in turn also amplifies the unavoidable electrical noise which comes with it.

Removing noise can be a complicated process, particularly if you are then aiming to print your images on a large scale. Photoshop has a number of plug-ins designed for this task. The most basic of these is the ‘Dust and Scratches’ filter, which can be reached from the Filter / Noise menu. This plug-in offers the user a live preview of the image and two faders. The first fader is marked Radius; essentially, this number represents the distance around individual pixels that Photoshop will look in order to find other pixels that it thinks are noisy.

The second fader, Threshold, determines how large the variation between these pixels must be before the program decides to clean them up. Dust and Scratches should only be used to remove small areas of noise (mainly, funnily enough, dust or scratches). As a result, you should make a marquee selection of the area that you wish to repair, and use the filter on this area only.

Later versions of Photoshop also include a plug-in called ‘Reduce Noise’, which can be reached from the same menu as Dust and Scratches. This has been revamped for CS2 (the latest version), and can be very useful. This filter again offers the user a live preview, but with considerably more faders. The first of these determines the strength at which the filter will operate on your image. After this, you have a fader giving you the option to determine what percentage of the detail of your image should be preserved, what percentage of the colour noise pixels should be removed, and how highly sharpened the remaining details should be. Finally, there is a checkbox at the bottom of the dialog box marked ‘Remove JPEG Artefact’. This is very useful if you are trying to clean up images which have acquired noise as a result of heavy JPEG compression.

Although Photoshop’s onboard plug-ins have improved in recent times, there is still no substitute for purpose-built software. Programs like NoiseNinja can be used as plug-ins, and will offer results far superior to anything you could achieve with Photoshop’s own offerings. This software is not cheap, but if you often find yourself cleaning up noise then you may well find that it makes your life considerably easier.