The Rule of Thirds 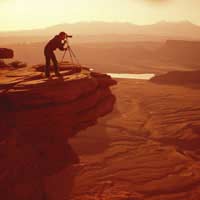 ‘Rules’ in photography is something of a moot subject; if you are simply producing photographs for your own enjoyment then the compositional side of your images may be of little interest to you. However, within the confines of ‘conventional’ photography, there are a number of rules and guidelines to which it is generally presumed that you should adhere. These are, of course, just guidelines, and many of the great photographers have broken them. But, when learning to take photographs, it is a good idea to have a grounding in their basic theory.

The rule of thirds revolves around the idea that every image will have a number of focal points. These are the elements of the image that draw the eye, and to which the viewer will devote the most attention. For many new photographers, the temptation is to simply centre their main focal point and click the shutter. However, there are several important reasons why this might not be the best course of action. A good image is about tension; the most striking photographs have a feeling of conflict between different parts of the picture, or of conflict between the viewer and subject. Framing the focal point in the centre of the frame often destroys this tension, revealing the coup de theatre, as it were, far too early.

It is both the spaces between the lines and the intersects that are of interest. Depending on the photograph that you are taking, you might arrange compositional elements in these spaces, or ‘attach’ them to the corners of the square that has been made in the centre of the image. For example, imagine that you are taking a street scene. You might have one vertical figure in the foreground, aligned with the lower right intersect, while you may also see a figure in the background, aligned with the upper left intersect.

The road itself, meanwhile, might travel through the space created between the two vertical lines. The rule of thirds also comes into its own with landscape photography. Imagine, for example, that you are shooting a seascape. Your compositional work is already done for you here: the land can occupy the lower third, the sky the upper third, and the sea the middle third. Each of these three elements begin and end roughly on one of your horizontal lines.

The rule of thirds is, perhaps, most important when taking portrait shots. It is generally thought that a good portrait is in the eyes, and so these should be the main focal point. Consider placing the eyes of your subject around the top-left intersect; this is the part of an image on which the eyes naturally fall first. You should always remember, however, that the term ‘rule of thirds’ is something of a misnomer. There is no such thing as a rule in photography, only guidelines to help you develop your own sense of composition. One of the best things you can do with the rule of thirds is to break it!