Home > Photography Basics > What is a Range-Finder?

What is a Range-Finder? 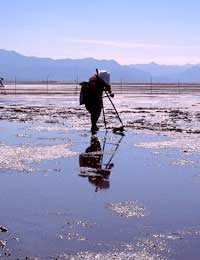 For many people the golden age of photography came some time between the ‘30s and ‘50s. It was during this time that some of the great documentary and candid photographers were working. One of the factors that tie all of these photographers together is their choice of camera; many of the journalists working at this time were using rangefinder cameras.

The term ‘rangefinder’ has come to mean a particular type of camera, but this is not entirely accurate. In reality a rangefinder is a focusing mechanism that can be attached to a variety of devices, including telescopes and binoculars. In terms of photography, however, there are two major types of rangefinder: coupled and non-coupled. Most consumer rangefinders present the photographer with two images when they look through the viewfinder. In order for the correct focus to be achieved, the photographer is required to adjust the focal distance until the two images sit on top of one another exactly.

Non-coupled rangefinders, which were popular when the technology was in its infancy, display the required focal distance and the photographer must then adjust the lens accordingly. Latterly, coupled models allowed the user to adjust both at the same time, meaning that one control adjusted the focus in both the rangefinding mechanism and the lens. This control is generally a ring on the lens itself.

In fact, the first commercially available rangefinder was coupled. The Kodak 3A Autographic Special first appeared on the market in 1916, and this technology remained highly popular until the mass adoption of the single lens reflex (which is covered in an article elsewhere on this site) during the late 1960s. Rangefinding devices had been available as accessories for Leica camera for some time, and it was this notable company who popularised the rangefinder camera with their M-series.

Rangefinders are available in a variety of formats, all the way up to large format bellows cameras, but 35mm has unquestionably been the most popular of these. Nikon made the most commercial ground with the rangefinder as they were adopted as the tool of choice for American photojournalists during the 1950s. Leica, however, became the archetypal example as a result of their use by photographers such as Cartier-Bresson, who was repeatedly quoted as saying that the small form factor and ease of use granted by his Leica enabled him to take pictures with the minimum of intrusion into the scene he was capturing.

After the advent of digital photography, camera manufacturers strove to incorporate the technology into a digital format. The number of models available is still small, however; Epson and Cosina manufactured the first digital rangefinder in 2004 (which uses the popular Leica M-mount), and Leica followed suit with their own model two years later.

Currently all of the available digital rangefinders also take film lenses, but their high cost has ensured that they have remained an enthusiast’s choice only. Furthermore, the lack of real-time image preview on the LCD has meant that they are unlikely to appeal to the consumer market for some time.