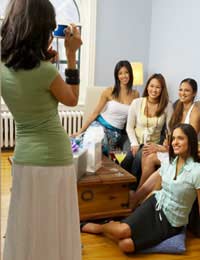 It is often the case that the ambition of an amateur photographer vastly outweighs their budget. Many would-be photographers are put off by the prices of so-called ‘pro-sumer’ or enthusiast cameras but are convinced that they need this kit in order to create the photographs that they have envisioned. However, there is no reason why this should be the case.

The cost of digital technology has fallen massively over the past two years, and it is now perfectly possible to pick up a hugely powerful camera for less than £200. You should be careful, however, when looking at comparative specifications; camera manufacturers tend to focus on the megapixel ratings of their models, but in reality this is fairly meaningless, as described in the article entitled ‘The Megapixel Myth’, which can be found elsewhere on this site. Instead, you should look for a camera which offers as good a quality lens as you can afford, and one with which you feel comfortable. Exactly the same principles apply when looking at analogue cameras, and these can be even cheaper.

Many of the great photographers began shooting with very cheap cameras. It is unrealistic to expect that you would be able to afford the latest digital rangefinder or a brand new Nikon D200 when you are first starting out, but there is equally no reason why this is necessary. If you have talent in this field, and an instinctive ability to compose an image, then the camera that you are using will be virtually immaterial. You should concentrate, therefore, not on making use of the hordes of features that might be available on even the cheapest camera, but rather on taking your time over framing your shots.

If you don’t have the ability to focus manually, then there is a valuable trick that you might find useful: cameras like these tend to focus when you half-depress the shutter, but they also tend to automatically focus on whatever is in the central foreground of the frame. If your subject is to one side of the frame, you can compose the image with that subject in the centre of the frame (thus ensuring that the camera focuses on it) and then recompose your image as you intended, while keeping the shutter half depressed. This means that you can focus on any part of an image successfully.

If you are shooting with film, then there are numerous ways in which you can create unique effects with the very cheapest of cameras. Indeed, some photographers specialise in using so-called ‘toy’ cameras, and images made with these are displayed in some of the most prestigious galleries in the world.

You might consider cross-processing your film, as described in an article elsewhere on this site. Similarly, if you are choosing to photograph on film, it is also worth bearing in mind that you can frequently pick up older, fully manual cameras of excellent quality, very cheaply second-hand.

What is a Range-Finder?