Home > Videography > How Does a Video Camera Work?

How Does a Video Camera Work? 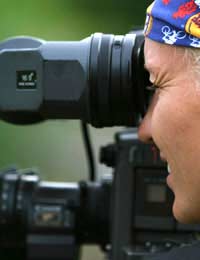 The BBC was a driving force in the adoption of the video camera. The first such device was built by John Logie Baird and was an electromechanical instrument which captured moving visuals in a fairly rudimentary way.

The BBC used Baird’s cameras during their televisual experiments in the 1930s until it was replaced in the 1940s by devices based on the cathode ray tube, or CRT. In basic terms a CRT is a tube, the content of which is a vacuum, from which is fired a beam of electrons. A magnetic field then deflects the electrons onto a surface on which an image appears. The CRT revolutionised the way video cameras were understood, and this technology was used almost exclusively until the 1980s.

Latterly, the CRT model has been abandoned in favour of static (rather than moving) alternatives such as charge-coupled devices (CCD) and complementary metal-oxide-semi-conductor (CMOS) sensors like those found in contemporary digital cameras. These solid-state sensors do not suffer from the same problems demonstrated by CRTs, such as burn-in, whereby the device becomes warped as a result of a static image being displayed for an extended period of time.

Today, there are two main types of video camera. The first of these is generally reserved for professional use; these may be designed either for moveable or static operation. Professional video cameras tend to use CCD sensors, but it is generally the case that they will contain more than one. It is mostly common for three CCDs to be present, each one of which is utilised for capturing either red, green or blue.

In the consumer market, most video cameras are what are generally known as ‘camcorders’. They take their name from the fact that they incorporate both a camera and a recording element; prior to their advent those wishing to record video were required to do so via a separate piece of recording hardware attached to the camera. The first consumer camcorder was Sony’s Betamovie, which recorded onto Sony’s own Betamax format videotape. The camera was bulky and, like many professional cameras, was therefore designed to be rested on the shoulder. Similarly, it was limited by a lack of rewind or fastforward functions.

Today, tape has generally been abandoned in favour of the digital video (DV) standard. MiniDV became the format of choice in the consumer market, although manufacturers have recently been marketing cameras which record directly to DVD. The range of cameras available is staggering; at the lower end a cheaply made lens and low quality CCD may capture the image and transfer it to miniDV. Towards the ‘pro-sumer’ end of the market (somewhere between enthusiast amateurs and professionals), however, it is possible to find DV camcorders which use multiple CCDs for excellent colour response.

Perhaps the next obvious step (and one which is being explored by many manufacturers) is the development of a viable camcorder which records in MPEG format directly to a hard drive. This would allow for high storage capacities and excellent synchronicity between camcorder and computer. Furthermore, the digital format has allowed a rapid improvement in sound quality, which has also been improved by the miniaturisation of high-end microphone parts.