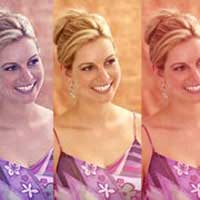 In those bygone days in which everyone carried around compact film cameras many people found that they had a common problem: if they were photographing indoors, in artificial light, they ended up with photographs which had a strange colour cast.

Their images would come out with a red-ish or blue-ish look, and, to the amateur photographer, it didn’t appear obvious why this was happening. In reality, these colour casts were due to something called colour temperature. These problems were fixed by professionals with a series of filters which were placed in front of the lens, but few amateurs bothered with, or knew about, these.

This might all sound rather complicated, but in actual fact it has vital practical applications for photographers. You may well hear studio photographers talking about the temperature of their lights, and the adjustments that they will have to make as a result. An extension of this is the choice between tungsten and strobe lights in the studio, which is covered in an article elsewhere on this site.

In basic terms, a higher colour temperature results in a blue hue, while a lower temperature means that you will see a redder cast. Previously, filters were used on lenses in order to absorb the unwanted colour and correct the inaccuracy; for example, if you were photographing by candle light alone, but you still wanted your images to have an accurate colour cast, you would use a red filter to absorb the red light. With digital photography, however, this is no longer necessary; as a result of the sensor’s sensitivity to different colours, digital photographers can simply instruct the sensor to automatically compensate by taking in less of the offending colour.

In most higher-end cameras, there is also the option to white balance manually. This principle works on the assumption that the camera will know what ‘absolute’ white looks like, and can adjust the other colours in accordance with this. As a result, in order to manually white balance you need to entirely fill the lens with, for example, a piece of white card which is reflecting the light from the room. Then you need to select the white balance function in order to ‘show’ the camera a correct white.

It should be noted that white balance can also be fixed later in the workflow. In Photoshop, there is a Remove Colour Cast function; this should perform the same functions as the automatic white balance on your camera. This may need some fine tuning, which can be achieved with the Colour Balance adjustment.