Home > Ask Our Experts > Can a Glow from a Light Source Appear Larger Than it is?

Can a Glow from a Light Source Appear Larger Than it is? 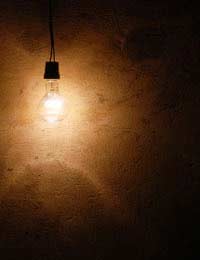 Can a small light source in a dark room appear much larger than it actually is on a low resolution camera?

Similarly, can the glow or reflection of a light appear as bright as the light itself?

Shooting in dark conditions can be a major headache for photographers. Even with the advent of digital cameras, which allow the photographer to instantly view the results of any experiment, it can take time and ingenuity to get the desired results in conditions of low light.

Particular problems can arise when shooting in a darkened environment that has a single, powerful light source. For example, a dark room lit with a single candle. As you have clearly discovered, this can produce unnatural and undesired effects. You have mentioned that the light source appears larger than it is. The most likely reason for this is that you are shooting directly into the light source itself; that is, the lens is pointed towards the light while the rest of the room is in darkness. In digital cameras this can produce a streaking effect whereby the light seems to be magnified and extended, possibly adding straight lines of pixels emanating from the light source. These resemble light hitting a prism.

Alternatively, if you are not shooting directly at the light source, you may be experiencing what is known as ‘vignetting’. While there are a number of potential causes of vignetting, the most likely in this case is that light is hitting the camera’s sensor at a right angle. Due to the nature of sensor construction, this type of light incident results in a stronger digital signal than dispersed light, or light of an equal intensity hitting the sensor straight on. vignetting of this type can, to a certain extent, be fixed in image editing software.

There are a number of means by which these phenomena can be avoided. In the first instance, you mentioned that you are using a low resolution camera. Most high resolution cameras have in-built systems for reducing vignetting before the image is converted to any readable file format. If this is a major problem for you, you may consider upgrading. Alternatively, try experimenting with a variety of filters placed over your lens. These can help to disperse the effects of particularly harsh light sources, and protect your lens at the same time.

What is the Copyright on Old Photographs to Use as Calendars?